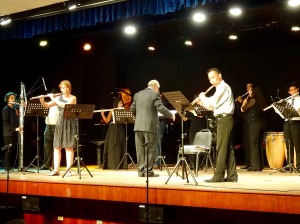 This summer, UNO’s Professor of Flute, Dr. Christine Beard embarked on a whirlwind of international and domestic appearances that collectively took her on tour performing and teaching in 6 cities in 4 countries, including her teacher’s 80th birthday concert in Austin, TX; Monterrey, Mexico, where she served as the headliner artist for the flute festival held at the Escuela Superior de Música y Danza de Monterrey; Lima, Peru, where she made her 2nd consecutive appearance as a guest artist at the Festivales Internacional de Flautistas held at the Conservatorio Nacional de Música; Toronto, Canada as a recitalist at the 2nd Canadian Flute Convention; Omaha, NE, in 4 concerts during the Omaha Under the Radar contemporary music festival; and Washington, D.C., where Beard gave the world premiere of a new piccolo duo by American composer David Loeb, performed on the closing ceremonies gala concert with the International SuperFlutes Collective, and was included in a lineup of 14 of “the world’s most recognized piccolo players” in a featured performance of music by John Williams and John Philip Sousa accompanied by the U.S. Army Field Band.