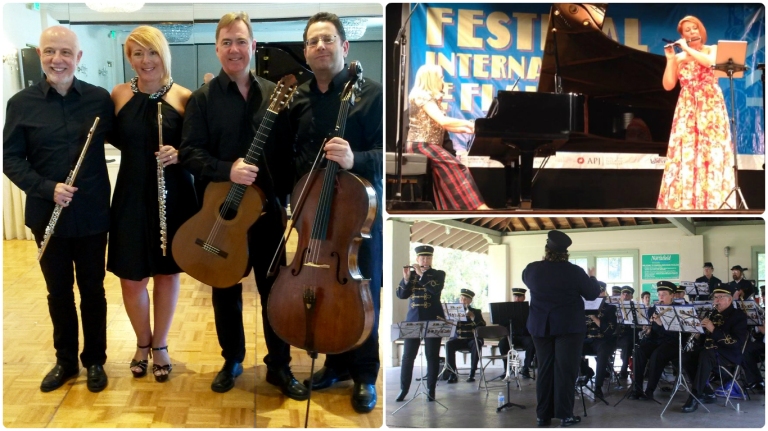 UNO’s Professor of Flute, Dr. Christine Beard spent the majority of her summer performing and teaching. In May, she traveled to Lima, Peru where she made her third consecutive appearance as a guest artist at the XXXI Festivales Internacional de Flautistas. During the weeklong festival, she taught flute masterclasses at the National Conservatory, performed a solo recital, and performed on the closing concerto concert with the Youth Orchestra of Lima.

After a quick side trip to Cusco and hiking at Machu Picchu, Christine returned to the States to prepare for the International Vintage Band Festival in Northfield, MN in July. For this tri-annual event, Christie ditched the fancy dresses and high heels in exchange for a reproduction Victorian-era wool band uniform c.1880, and performed on her c.1900 vintage Rudall Carte high-pitch piccolo as a member of the acclaimed Newberry’s Victorian Cornet Band (musician’s note: this band tunes to A=454!). Invited to be the first woodwind core member of NVCB after her inaugural guest appearance with them in 2006, she has been the featured soloist with the band at every VBF, including 2016 when she performed “Through the Air” by August Damm on six concerts throughout the week.

Beard’s summer concluded in August with her 14th appearance at the National Flute Association Convention, this year held in San Diego, CA. At the 2016 NFA, Christine served as a judge for the semi-final round of the NFA Piccolo Artist Competition, and also performed the world premiere of “Haven” for piccolo and piano, which she commissioned Nebraska composer Daniel Baldwin. On the final day of the convention, Beard invited Ayres Potthoff (flute), Rodrigo Alquati (cello) and Daniel Wolff (guitar) -all musicians from Porto Alegre, Brazil – to join her on 45-minute chamber music concert of works by Wolff, which included the world premiere of “California Card” for 2 flutes, cello and guitar, dedicated to Beard and written for this group of friends for their performance at the 2016 NFA. Visit http://www.christiebeard.com for more photos and videos from these and other performances by Beard.